Q is for Quaff: The Influence of MUDs on MMORPGs

The first time I played Diablo III, I was immediately impressed by the subtle nod to the past via the game’s keyboard shortcuts. If you have played Diablo III on the PC, you’ll know that to use a potion, the keyboard shortcut to do so is “q”, but why that instead of “d” for “drink”, or “u” for “use”? Believe it or not, “q” stands for “quaff”, a word that I’ve (personally) only seen in text-based roleplaying games known as MUDs, or Multi-User Dungeons (a bit of research shows that the word has been used in tabletop games, such as Dungeons & Dragons, but player lingo can differ from the official language). You don’t drink or use a potion in a MUD. You quaff it.

The term MUD was originally coined in 1978 by Roy Trubshaw, a student at Essex University. Roy started to build a multi-player RPG, named Multi-User Dungeon, in tribute to the short-lived Dungeon version of the famous Zorksingle-player text-based RPG. Later known as MUD1, the game ran for 9 years on the Essex University network until it was shut down in 1987, but that wasn’t the end of the new type of gaming (it’s worth noting that Stanford University just received the rights to distribute the source code for MUD1 last year, and you can still play a copy of the original game over at british-legends.com). Starting in the mid 1980’s, dozens of games inspired by, and often derived directly from, MUD1 were released. Many of these games were hosted for free on home and university computers, most popular of which was AberMUD, a custom MUD codebase with gameplay heavily inspired by MUD1.

AberMUD, while not necessarily the grandfather of modern MUDs, is most certainly the great uncle. It’s popularity inspired the core codebases of today’s most popular games, most notably TinyMUD, LPMud, and DikuMUD. Since the late 1990’s, I have personally played and built numerous MUDs that were derived from the Diku codebase. A popular hack and slash game, Diku was created and open sourced in 1990 by several developers at the department of computer science at The University of Copenhagen ( D atalogisk I nstitut K øbenhavns U niversitet).

Due to its popularity, Diku’s source code has become the root of one of the largest trees of derived MUD codebases. In fact, every game I’ve ever built or played has been in the Diku family tree, including a MUD I am working on that will be released under the Geekistry brand this year. DikuMUD is the first seed of inspiration that spawned countless MMORPGs to this day, including Everquest, World of Warcraft, and Ultima Online. 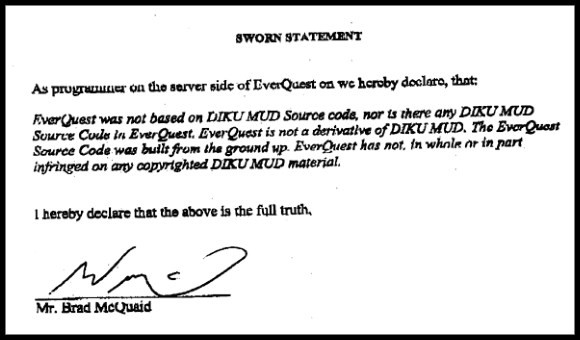 So, the next time you are playing your favorite video game, remember that even the smallest thing could be rooted in decades of gaming history. It’s a pretty exciting thought to have, as it, in some small way, ties gamers together through the years in more ways than one. Want to try some truly vintage gaming for yourself? Check out The Mud Connector, a favorite site of mine that catalogs and ranks every MUD that is still in operation today.